Announcing the Publication of

The Hague Abduction Convention: Practical Issues and Procedures for the Family Lawyer 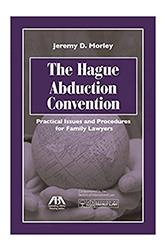 A NEWLY RELEASED BOOK PUBLISHED BY  BY THE AMERICAN BAR ASSOCIATION

The Hague Abduction Convention tells family lawyers how this critical treaty works in the United States, both in theory and in practice. The renowned author, Jeremy D. Morley, has enormous experience counseling clients and fellow practitioners as to international family law matters globally, as well as lecturing on international child custody law to audiences around the world.

The Convention is misunderstood by many family lawyers, and judges may not be fully aware of the law and the voluminous case law that has developed around it. It operates in the United States in ways that are significantly different than in other Hague countries due to federal legislation that implements the treaty, the concurrence of federal and state jurisdiction, the uniform state legislation on child custody jurisdiction and a host of other factors.

This book provides a much-needed practical resource for U.S. practitioners that explains the operation of the treaty in American courts, both federal and state, and unravels the relationship between the Hague Convention, the Uniform Child Custody Jurisdiction and Enforcement Act and foreign child custody laws. Focusing mostly on what are sometimes called "incoming" abductions, or abductions from other countries into the U.S., The Hague Abduction Conventionbegins with a brief overview of the Convention. Subsequent chapters address the issues of primary concern for practitioners: