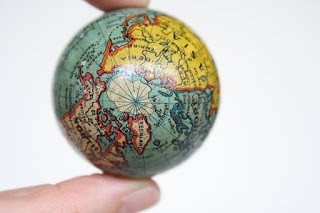 The world is getting smaller and smaller. We live in a global society fueled by a global economy. International travel has never been easier. And now, thanks to the internet, we're all connected in new ways and with fewer barriers than ever before. These days, people meet and fall in love across international boundaries every day, and so it's no surprise that marriages involving dual citizenship are increasingly common

But, as you might suspect, dual citizenship marriages aren't somehow immune to divorce or its financial implications.

I've written plenty about how complicated divorce can be, and how these complications are compounded by different laws in different states (for example, those governing legal separation and those concerning the distinction between separate and marital property). Throw different countries into the mix, and the challenges quickly become even more complex . . . and if children are involved, the situation can become tremendously complicated and emotionally charged. (Case in point: A few months ago, actress Kelly Rutherford's divorce made headlines when a judge ordered her two American children to move to France because their father – who is a German citizen — was expelled from the United States.)

Jeremy D. Morley, who is a New York lawyer and the author of International Family Law Practice and The Hague Abduction Convention: Practical Issues and Procedures for the Family Lawyer, as well as numerous articles on international family law, summed it up nicely.

“Simply put, money can be divided but children cannot,” he told me recently. “Divorcing parents who stay in the same town can often make sensible arrangements to share the parenting of their children or otherwise a local court can not only issue appropriate orders but can also enforce them as needed. But when the parents cannot even agree on which country to live in, all bets are off.”

If you are a woman who's part of a dual citizenship marriage and you're contemplating divorce, or if you're planning to move overseas with your husband or fiancé –even if just “to try it out” –please proceed with caution. Before you leave, make sure you are familiar with the answers to some common questions about divorce involving dual citizenship and/or regulations from another country:

What exactly is dual citizenship?

The U.S. Department of State acknowledges that a person can be a citizen of two countries at the same time. Sometimes, dual citizenship (or “dual nationality,” as it's also called) happens automatically. For example, a child born in a foreign country to U.S. citizen parents may be both a U.S. citizen and a citizen of the country of birth.

In other cases, it's a matter of choice. From the U.S. Department of State website:

Dual nationals owe allegiance to two countries and are required to obey the laws of both.

My husband has dual nationality, and we're living abroad. Where do we get divorced?

Even if you're a U.S. citizen, the court with jurisdiction over your divorce will most likely be the one in the country where you live. If this is a country that doesn't afford women the same rights as men, it could be very, very difficult to get a divorce, let alone a fair settlement.

If you own home(s) abroad and have flexibility as to the location and timing of your divorce, it is well worth the effort to research what the most favorable venue might be. Countries vary in their legal views of women's rights, acceptable grounds for divorce, alimony, property distribution, child custody and child support, among other things. You may find wide disparities in how you'll be treated in different jurisdictions, and as Jeremy points out, the financial consequences of being divorced in one jurisdiction rather than another might be highly significant.

“The difference between getting divorced in London instead of in New York can be staggering,” he explained.

As you might expect, international family lawyers are often called upon to advise whether or not a foreign divorce will be fully recognized. Surprisingly, though, providing such advice is often difficult and sometimes fraught with risk.

“It would be reasonable to expect that legislatures and courts would have developed clear ‘cut and dried' answers to as basic a question as ‘Are we divorced?'” Jeremy said. “However, when that question is asked in the context of a foreign divorce the answer all too often is, ‘It depends.'”

I got divorced over there. Is it legal back here in the U.S.?

If you and your husband lived “there” at the time of your divorce, then probably yes.

Be aware that there is no treaty between the U.S. and any other country ensuring recognition of foreign divorces. However, the State Department notes that divorces obtained in foreign countries are generally legally recognized here, if both parties were living in the country in question when it was issued.

Several states, including California, will not recognize a divorce decree obtained abroad when both spouses were living in their home state. If you're unsure about the validity of a foreign divorce, you should contact the Attorney General's office in your state. You will need copies of all the documentation of your marriage and divorce and applicable foreign laws.

How do I begin the divorce process?

I regularly advise women to hire a team of qualified divorce professionals as soon as they know a divorce is in their future. In cases of dual citizenship, this is even more critical. You will need someone on your side who is expert in the divorce and family laws of the other country, as well as an expert divorce financial strategist to help you navigate the financial details of your case.

If you have children, you may want to add an expert in international custody issues to your team. These issues are notoriously complicated, the laws are hard to enforce, and the stakes could not be higher. We've all heard horrifying news items about parental kidnapping, in which one parent takes the child(ren) to another country, and the other parent fights for years, at tremendous expense, in hopes of bringing them back to the U.S. – sometimes without success. (For an excellent discussion related to this topic, see the article “The Plight of the Expatriate Spouse” here.)

Being well-prepared, well-informed and well-advised about the divorce process is critical for any divorcing woman, but especially so for those with an international component to their marriage. Unfortunately, a hostile divorce from a spouse with dual citizenship can be a scenario where there's potentially very little to be optimistic about, and potentially a lot to be concerned –and even alarmed –about.

Still, as our world continues to get smaller and smaller, international and/or dual citizenship divorces are going to become increasingly common. The good news is that as these cases become more routine, more help will become available for women facing the challenges of dual citizenship divorce. Remember: If your relationship spans international borders, make sure your divorce team has the qualifications and experience you require.

“As people travel, set up residences in different countries, and become involved in international business (and personal) affairs, they necessarily expose their personal lives to an array of different legal structures,” concludes Jeremy. “In some quarters, forum-shopping is a dirty term, but in international family law it is often an essential process. In fact, it could even be considered gross negligence if a divorce lawyer were to select the appropriate jurisdiction based on the location of the lawyer's office rather than on the best interests of the client. If the client has the option of bringing suit in more than one jurisdiction it is absurd to suggest that the lawyer does not have a serious obligation to consider which jurisdiction would likely yield the preferable result.”