Wealthy Chinese businessmen learn the value of the prenup 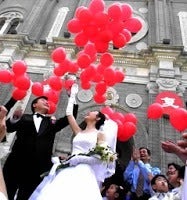 With divorce increasingly commonplace in China, prenuptial agreements are becoming a trend in order to avoid legal battles over property in the event of a breakup.

The trend is reflected in the booming business of Yao Xiangyang (a pseudonym), a lawyer in southern China's Guangdong province who began to move into the area of prenuptial agreements a few years ago after receiving requests from numerous entrepreneurs, which convinced him that few in China possess sufficient legal knowledge to protect their fortunes.

Lu Zhijie (pseudonym), 55, a Shanghai businessman, married He Chen (pseudonym), then a woman in her 20s who worked at his company, more than 10 years ago after divorcing his first wife and sending her and their daughter to live in Austria. A few years ago, Lu was left paralyzed after a car accident and He Chen subsequently took over the management of his company. He Chen later had an affair with Li Xin, a manager she had hired, and gradually placed the company and its finances under her complete control. Lu consulted a friend who was a lawyer, but found he had little legal recourse.

Lu's predicament could have been avoided had he arranged a prenuptial agreement before his remarriage. But in China, such agreements are generally only seen in marriages involving a foreign national. When Yang Huijuan recently got remarried, to an American artist, they signed a near 200-page prenup which covered the division of assets and also specified the sites for both the establishment and dismantling of the marriage.

Media stories are rife in China of exclusive matchmaking clubs introducing wealthy single entrepreneurs to potential trophy wives. According to the Chinese-language China Entrepreneur magazine, growing numbers of wealthy individuals in the country have begun to see the wisdom of what is perceived as a somewhat alien — and particularly American — arrangement that jars with the tradtional Chinese view of marriage. To cite one example, Meng Shan (pseudonym), a Shanghai businessman, convinced his wife-to-be, 10 years his junior from a middle-class family, to sign a prenuptial agreement which assures his sole retention of his property and company in he event of divorce.