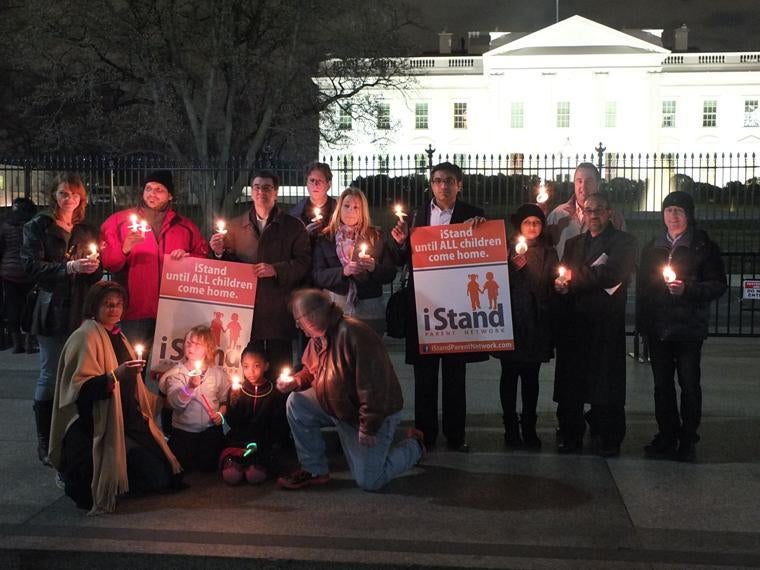 A group of Indian American parents held a candle light vigil outside the White House on Mar. 25, 2015, seeking the U.S. government’s help in reuniting them with their “abducted” children from India. (photo courtesy of Ravi Parmar)

Washington, D.C. — Around 60 Indian American parents have asked the U.S. government and Congress to consider imposing sanctions on India, alleging that they have "not been able to get justice" from the Indian system in reuniting with their kids who have been "abducted" by their spouses there.

In all the cases, the "abduction" is alleged to be by their spouses, who fled to India after a marital dispute and got court orders against them.

All these "abducted" kids are American citizens and in the past few months American lawmakers have joined hands in urging the Obama administration to consider imposing sanctions on countries like India, where the government is not helping them getting back the abducted U.S. kids.

Nearly a dozen of these Indian American parents from various parts of the U.S. late last month held a series of meetings with officials from the State Department, testified before a Congressional committee, and met a large number of lawmakers urging to help them get their kids back to the U.S.

They held a candle light vigil at the White House and also went to the Indian Embassy to submit a memorandum to the Indian government.

These Indian American parents are part of the larger group — Bring Our Kids Home – which comprises parents facing the same traumatic problem of "abducted children" as in other countries like Pakistan, Russia, Japan and Greece.

International parental child abduction is a form of child abuse and a violation of U.S. and international law.

Several nations have signed the Hague Convention on Civil Aspects of International Parental Child Abductions ("Hague Convention"), but India is not a signatory to it.

As per State Department reports, from 2012-13, India ranked as the #1 non-Hague signatory country, said Ravi Parmar, one of the Indian American parents.

A law was passed by the U.S. Congress last year after years of inaction on the part of successive U.S. administrations to enforce existing U.S. laws and Hague Convention obligations.

"This new law could result in sanctions on those countries that don't cooperate in returning U.S. children, victims of IPCA," said Vikram Jagtiani, another parent.

Most of these Indian American parents have written multiple letters to both Prime Minister Narendra Modi and External Affairs Minister Sushma Swaraj, but have received no response so far.

"Why I am not getting my children back. They need to be with me," Bindu Philips, who testified before a Congressional committee late in February, told PTI.

IANS adds: Recounting her heartrending tale of woe, Philips told the committee, "Help me to make my voice heard in a way that shall be meaningful and allow me to be reunited with my children who need the love and nurturing of their mother.”

"Tragically, my world and that of my innocent children, was violently disrupted by my ex-husband, Sunil Jacob in December of 2008," said Philips, a mother of twin boys, Albert Philip Jacob and Alfred William Jacob, both 14 now.

Accusing Jacob of orchestrating the kidnapping of the children during a vacation to India, she told the panel that she was not only "very cruelly separated from my children" but also not allowed to see or communicate with them after her husband transferred them to another school with strict orders not to let the mother or any of the maternal relatives see them.

In December 2009, the Superior Court Family Part in New Jersey "not only granted me sole custody of the children" but also "demanded their immediate return to the U.S," said Philips.

In turn, her ex-husband filed for custody of the children in Indian courts after the U.S. child custody was filed, Philips alleged. The case is currently pending in the Supreme Court of India.