Some Guidelines for Negotiating and Drafting Prenuptial Agreements for Parties with a U.S. Connection 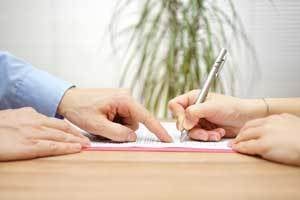 2.  Independent representation. Cures many more sins, and is absolutely required in some – but not most – states.

3.  Time gap prior to marriage. Usually not legally required (but see California, for example) but it is good practice.

In a Massachusetts case, there was no coercion or duress when a pregnant single mother was shown the prenuptial agreement shortly before scheduled wedding date and was told that if she did not sign it there would be no wedding. She was given enough review time, she was represented by counsel whose opinion that she should not sign the agreement she rejected, and she informed a notary that signing the agreement was her "free act and deed." Biliouris v. Biliouris, 67 Mass. App. Ct. 149, 852 N.E.2d 687 (2006).

Contrast an Ohio case holding that a prenuptial agreement was unenforceable when H and W cohabited before marriage, W began breast cancer treatment 3 months before marriage, they met H's lawyer jointly 4 days before the wedding and signed the prenup then. Overreaching was defined as one party outwitting or cheating the other “by artifice or cunning, or by exploiting a significant disparity in understanding the nature of the transaction.” There was insufficient disclosure and the court accepted W's testimony that she “would have signed anything in order to make [H] happy and to ensure the marriage.” Grimm v. Grimm, 2003 WL 103429 (Ohio App. 12 Dist. 2003).

These vary from state to state. E.g. New York – must be “in writing, subscribed by the parties, and acknowledged or proven in the manner required to entitle a deed to be recorded” ( Domestic Relations Law § 236[B][3]).

a.  Retirement waivers. Many cases hold that only a “spouse” can waive an interest in pension plans covered by federal law. Hurwitz v. Sher, 982 F.2d 778 (2d Cir. 1993). Waiver of interest in an ERISA pension plan in a prenuptial agreement may not suffice. Separate waiver required after the marriage.

b.  Religious issues. Prenuptial agreements relating to the religious upbringing of the children are most likely unconstitutionally unenforceable.

c.  Regulation of conduct during marriage. The Uniform Act authorizes parties to contract as to all matters not in violation of public policy or a criminal statute. Possible examples: faithfulness, religious observance, exercise and weight gain, choice of place of residency, freedom to pursue career opportunities. But most personal obligation provisions have not been upheld. A “mother-in-law can live with us” provision was against public policy. Koch v. Koch, 232 A.2d 157 (N.J. Super. Ct. 1967). A frequency of sex provision is also unenforceable. Favrot, 332 So. 2d 873 (La. Ct. App. 1976). Distinction between financial and other issues. But provisions about sharing expenses in a defined way during marriage might violate obligation of mutual support inherent in marriage. In re Mathiasen, 268 Cal. Rptr. 895 (Cal. Ct. App. 1990).

Note that some such provisions in a prenup might indicate overreaching, which could threaten the entire agreement.

e.  Recitals. Recitals are customarily included to reflect the situation of the parties upon execution of the agreement and to confirm specifically that each element of a valid and enforceable premarital agreement has been met.

f.  Pre-Marital Transfers. Transfers before the marriage pursuant to a premarital agreement are not protected by the federal gift marital tax deduction.

Since the economic elements of most (but not all) U.S. state divorce laws are based upon a distinction between separate and marital property this distinction should generally be the basis upon which prenuptial agreements intended to be effective in the U.S. should be structured, i.e. identify separate property and perhaps expand the definition beyond that which is called for by the default provisions of state law.

It is customary to identify separate property in detail in a schedule and then to add provisions to include specified types of assets of assets to be acquired in the future.

Note that many U.S. states provide that the increased post-marriage value of “active assets” is marital property, while premarital “passive assets” are not divided; so that great care must be taken to handle this if appropriate.

Particular care should be applied to businesses that might change their form in the future, so as to include new business activities, reinvestments, conversions, other potential uses of business assets, etc.

Consider a provision regulating what will occur if one spouse contributes separate property to the other's business.

Consider a provision acknowledging that reinvest into a business has been done in the past, may be done in the future and may adversely affect family income.

Specify an expected inheritance if likely to be significant.

These can be critical based on laws in U.S. states that convert separate property into marital property if there is commingling.

Perhaps specify particular events that will not (or will) constitute transmutation, e.g. the filing of a joint tax return or designating a spouse as a beneficiary of other's estate or episodic use of separate property.

Since New York (unlike other states, with limited exceptions) includes these, if obtained during the marriage, as assets to be valued based on their projected future income stream (“enhanced earning capacity”), these items should be considered in any U.S. prenuptial agreement.

In specifying whether earnings during marriage will be separate or marital remember to consider (a) Social Security income paid after retirement from premarital contributions; (b) income to be used to support children and / or a spouse from a prior marriage; (c) a spouse's compensation might include an array of benefits, deferred compensation plans and schemes not yet invented.

It might be appropriate to make provision for future gifts in light of tax code provisions. It is also appropriate to specify whether the parties will file joint U.S. tax returns and to cover such matters as allocation of tax liabilities. Also consider whether there should be an apportionment of capital gains tax if, for example, a spouse's premarital residence is sold upon the marriage.

Identifying – and using -- a joint household account is often a useful and respectful way to provide spouses with appropriate access to funds for day-to-day needs without exposing accounts with large assets to such activities; but here is one area where it is important not just to make provision for such accounts but also to use them.

Generally, US states do not provide for any asset-sharing resulting from premarital cohabitation, in the absence of a contract. Therefore when there has been such cohabitation it might be appropriate to make an express reference to that fact.

It is customary to include extensive provisions regarding ownership of a marital residence and such matters as credits for premarital (or post-marital) contributions upon a divorce.

Since there is no public medical program in the U.S. and since health issues may be the kind of unanticipated event that might cause a court to override a prenuptial agreement, it is highly recommended that consideration be given to health insurance and health care expenses when drafting a prenuptial agreement. Consider a “catastrophic illness” provision.

Consider (a) ignoring this factor since it is the area most likely to be challenged or because the exposure is limited in the state in which the parties plan to reside; or (b) precluding spousal support if the marriage does not survive a designated period; or limiting the spousal support to a spouse's needs that might be defined to exclude certain “needs” such as plastic surgery or round-the-world trips.

Other typical permutations are: (a) a schedule based upon the length of the marriage; (b) a schedule based upon a share of the family income; (c) a lump-sum plus designated periodic payments; and (d) a lump-sum that will vary depending on specified circumstances such as whether the spouse is to remain in the marital residence or is gainfully employed at the end of the marriage or is the primary care-provider to the parties' children..

Such provisions might include: (a) allowing less wealthy spouse's earnings during marriage to be excluded from division; (b) creating a fund sufficient to maintain the spouse for a period of time or in a set amount for each year the marriage survives; (c) providing for spousal support at an amount set by the court but for a period longer than likely to be ordered in the state in question; (d) each party agreeing to be gainfully employed during the marriage; (e) one party expressly explaining why he or she will not work after marriage, e.g. expressly acknowledging the other spouse is and will remain retired or that the other spouse is well qualified to work but freely chooses not to do so; (f) a wealthier party expressly assuming a financial obligation towards the pre-existing children of the other spouse or the parents of the other spouse; (g) one party assuming the debts of the other party; (h) special provisions in the event children are born; (i) a provision for inflation; and (j) a “sunset” provision.

Prenuptial agreements in the U.S. usually specify when the marriage is to be deemed ended for the purpose of the agreement upon a physical separation, upon a written notice from one party to the other, upon the filing of a divorce or upon the issuance of a divorce judgment?

It is customary to include specific provisions to deal with the potential death of either spouse such as a waiver of inheritance rights upon the initiation of a divorce or separation case or a provision for payment of a specified amount if a death occurs during the marriage or a provision requiring that a certain amount of life insurance be funded during the marriage. Often such provisions begin with a complete and express mutual waiver of all rights to a share in the other's property upon death and then an express designation of the specific rights that each will be entitled to.

It is probably appropriate to provide “famous” people with a provision barring publicity of private matters and authorizing strong remedies for a violation of such provision.

If one spouse is relocating or has recently relocated internationally, consider some provisions to handle the consequences. Possibilities include: (a) a provision that if the marriage ends and if a spouse wishes to “return home” the other spouse will fund such a return; (b) a provision that the parties will relocate to the other country within a designated period of time (Note: This can create enormous problems, not only with enforceability but also with “fairness” since if the relocation does not occur an unfairness claim might be enhanced).