I was recently interviewed in connection with the below article, set to be published in the latest edition of the Economist:. 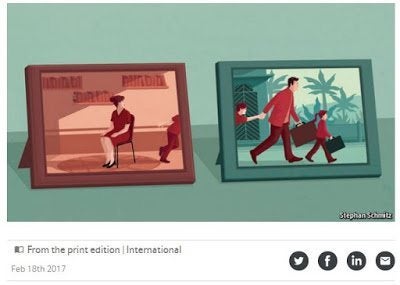 Kate Baggott and her two children live in a tiny converted attic in a village near Frankfurt. Ms Baggott, who is Canadian, has a temporary residence permit and cannot work or receive benefits. The trio arrived in Germany in October, after a Canadian court order gave them a day's notice to get on the plane. Ms Baggott's ex-husband, a Canadian living in Germany, had revoked his permission for the children's move to Canada after they had been there nearly a year, alleging “parental child abduction”. A German court has given Ms Baggott full custody, but she must stay until an appeal is over.

Such ordeals are becoming more common as the number of multi-national and footloose families grows. Across the European Union, for example, one in seven births is to a woman who is a foreign citizen. In London, a whopping two-thirds of newborns in 2015 had at least one parent who was born abroad. In Denmark, Spain and Sweden more than a tenth of divorces end marriages in which at least one partner is a non-citizen.

The first question in a cross-border break-up is which country's laws apply. When lots of money is at stake there is an incentive to “forum-shop”. Some jurisdictions are friendlier to the richer partner. Germany and Sweden exclude assets owned before the marriage from any settlement. Ongoing financial support of one partner by the other is rare in France and Texas—and ruled out in another American state, Georgia, if the spouse seeking support was adulterous.

Under English law, by contrast, family fortunes are generally split evenly, including anything owned before the marriage. Prenuptial agreements, especially if drawn up by a lawyer representing both spouses, are often ignored. The wife of a Russian oligarch or a Malaysian tycoon can file for divorce in London if she can persuade a judge that she has sufficient links to England. A judge, says David Hodson, a family lawyer in London, might be presented with a list of supporting items, which may be as trivial as which sports team the husband roots for, or where the family poodle gets a trim.

Across the European Union, until recently the rule has been that the courts of the country in which divorce papers are filed first gets to hear the case. Couples often rushed to file rather than attempting to fix marital problems. But in some countries that is changing: last year Estonia became the 17th EU country since 2010 to sign an agreement known as Rome III that specifies how to decide which country's law applies (usually the couple's most recent country of residence, unless they agree otherwise). Though the deal brings welcome clarity, one downside is that courts in one country may have to apply another country's unfamiliar laws. And one spouse may be tricked or bullied into agreeing to a divorce in the country that best suits the other.

The bitterest battles, though, are about children, not money. Approaches to custody vary wildly from place to place. Getting children back if an ex-partner has taken them abroad can be impossible. And when a cross-border marriage ends one partner's right to stay in the country where the couple lived may end too, if it depended on the other's nationality or visa.

Treasures of the heart
Under the Hague Abduction Convention, a treaty signed by 95 countries, decisions about custody and relocation fall to courts in the child's country of “habitual residence”. If one parent takes a child abroad without the other's consent or a court order, that counts as child abduction. The destination country must arrange the child's return.

But plenty of countries have not signed, including Egypt, India and Nigeria. They can be havens for abducting parents. Around 1,800 children are abducted from EU countries each year. More than 600 were taken from America in 2015; about 500 abductions are reported to American authorities each year the other way round.

Some countries, including Australia and New Zealand, often regard themselves as a child's “habitual residence” from the moment the child arrives. The EU sets the threshold at three months. America differs from state to state: six months' residence is usually what counts. GlobalARRK, a British charity that helps parents like Ms Baggott, is campaigning for information on such rules to be included among the documents issued to families for their move abroad. It also lobbies for a standard threshold of one year for habitual residence and advises parents to sign a pre-move contract stating that the child can go home at any time. Though such contracts are not watertight, they would at least alert parents to the issue.

Britain is comparatively helpful to foreign parents who seek a child's return: it provides help with legal advice and translation. But plenty of countries do little or nothing. Family judges in many places favour their compatriots, though they may dress up their decisions as being in the child's interests. Parents who can no longer pay their way through foreign courts may never see their children again.

Some parents do not realise they are committing a crime when they abscond with the children, says Alison Shalaby of Reunite, a British charity that supports families involved in cross-border custody disputes. Even the authorities may not know the law. Michael, whose former partner took their children from Britain to France in 2015, was told by police that no crime had been committed. After he arranged for Reunite to brief them, it took more than five months to get a French court order for the children's return.

Other countries are slower still, often because there are no designated judges familiar with international laws. Over a third of abductions from America to Brazil, for example, drag on for at least 18 months. When a case is eventually heard the children may be well settled, and the judge reluctant to order their return.

A renewed push is under way to cut the number of child abductions, and to resolve cases quickly. The EU is considering setting an 18-week deadline for the completion of all return proceedings and making the process cheaper by abolishing various court fees. And more countries are signing up to the Hague Convention: Pakistan, where about 40 to 50 British children are taken each year, will sign next month. India, one of the main destinations for abducting parents, recently launched a public consultation on whether to sign up too.

But the convention has a big flaw: it makes no mention of domestic violence. Many of the parents it classifies as abductors are women fleeing abusive partners. One eastern European woman who moved to Britain shortly before giving birth and fled her violent fiancé four months later, says she was turned away by women's shelters and denied benefits because she had lived in Britain for such a short time. For the past year she has lived off friends' charity. The police have taken her passport to stop her leaving Britain with the baby. Another European woman, living in New Zealand, says she fears being deported without her toddlers when her visa expires in a few months. She fled domestic abuse with the children and a bag of clothes in December, and has been moving from one friend's house to another ever since.

Child abduction is often a desperate parent's move of last resort, says GlobalARRK's founder, Roz Osborne. One parent, who has residence rights, may have been granted sole or joint custody, meaning the children cannot be taken abroad without permission. But the other parent may have entered on a spousal visa which lapses when the marriage ends. Even if permission to remain is granted, it may be without the right to work or receive state benefits. In such cases, the decision of a family court guaranteeing visiting rights or joint custody can be close to meaningless.

Britain's departure from the EU could mean many more divorcing parents find themselves in this desperate state. Around 3.3m citizens of other EU countries live in Britain, and 1.2m Britons have moved in the opposite direction; so far it is unclear whether they will continue to have the right to stay put and work. And in America, says Jeremy Morley, a lawyer in New York who specialises in international family law, immigration issues are increasingly used as weapons in child-custody cases. Judges in family courts, he says, often pay little attention to immigration issues when ruling on custody, because they know few people are deported solely because their visas have expired. But under Donald Trump, that may change.

Many parents have no idea what they sign up for when they agree to follow a spouse abroad, says Ms Osborne. They may mistakenly believe that if things do not work out, they can simply bring the children back home. Ms Baggott's move to Germany was supposed to be a five-year adventure, the duration of her husband's work visa. Instead, she says, she endured “a decade of hell”.