From the State Department's Annual Report on International Child Abduction:

Ecuador once again demonstrated a "pattern of noncompliance" in 2015 because:

-Thirty percent or more of the total abduction cases were unresolved;

-The Foreign Central Authority regularly failed to fulfill its responsibilities pursuant to the Convention;

-The judicial authority regularly failed to implement and comply with the provisions of the Convention; and

-Law enforcement authorities regularly failed to locate children or enforce return orders or determinations of rights of access rendered by the judicial authorities.

The Convention is in force between the United States and Ecuador.

To improve the resolution of abduction cases in Ecuador, the Department recommends that the United States:

-Promote training with judicial and administrative authorities on the effective handling of international parental child abduction cases; and

-Promote training with law enforcement entities on how to effectively locate children and enforce court-ordered returns.

Ecuador's relevant statistics regarding Abduction & Access cases can be seen below: 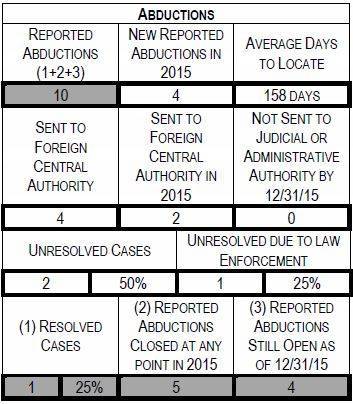 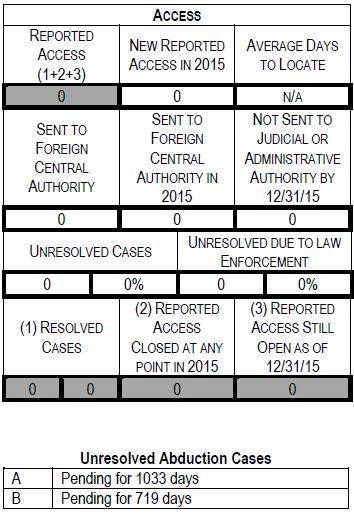 The Office of Children's Issues of the U.S. State Department's Bureau of Consular Affairs has recently released the annual report on Hague Convention compliance. The reports detail various issues of non-compliance with member countries. It places countries under two categories; “Not Compliant” and “Demonstrating Patterns of Noncompliance,” with the former category signaling more serious compliance problems. The 2011 report was largely silent as to Ecuador, only noting the details of one case as an "Unresolved Return Application." Ecuador has been noted as "Non Compliant" in the past (as recently as 2005). This year, Ecuador has been classified as “DemonstratingPatterns of Noncompliance." They were classified as such also in 2008. The text of the 2012 report follows, as well as one case summary from the report.

Patterns of Noncompliance with the Convention:
Ecuador

Ecuador demonstrated patterns of non-compliance in central authority performance and judicial performance. Although the Ecuadorian Central Authority (ECA) performed adequately early in 2011, its responsiveness diminished drastically during the second half of the year. The ECA has a severe shortage of resources and did not provide requested case updates. The ECA did not acknowledge receipt of a Convention application sent in September, and it did not provide a copy of the denial judgment in an access case decided in August, despite multiple requests. The judicial system is slow to schedule hearings and provide decisions, although this practice is not specific to Convention or other family law cases. The ECA's responsibility to represent parents was recently transferred to the Public Defenders' office; it remains unclear how this transfer of authority will be handled.

In November 2010, the USCA forwarded an application for access to replace a June 2008 application for return, which was not assigned a court date after nearly two years. The USCA asked the ECA to press the court for a hearing date, but no date was given, and the discouraged parent withdrew his access application in July 2011. In another case, filed with the ECA in September 2010, the court has not yet held a hearing on the application. In Ecuador, Convention cases are not formally initiated in court until the court officially orders law enforcement to locate the child and the child is subsequently located. In one instance, for reasons unknown to the USCA, notwithstanding the fact that law enforcement located the child outside the official court process based on an Interpol request, the court declined to officially order law enforcement to locate the child. Thus, the court has not formally opened the case and there has been no further progress to date.During judicial training on the Convention held in Quito in January 2011, the USCA noted that judges throughout Ecuador will require substantial additional training before the Convention will become fully operational in the country.

The Convention application was filed in March 2010 and a hearing was held in March 2011. The TP requested that the court hear testimony from a number of witnesses. The court declined to hear the testimony and the TP appealed. In October 2011, the appellate court upheld the lower court decision and ordered the lower court to proceed with the case. The USCA and U.S. Embassy San Salvador have regularly requested updates from SCA on court proceedings.