Criminal prosecution can play a significant role in international child abduction cases. However, it can be a double-edged sword. Some courts use the possibility of criminal prosecution against an abducting parent as a reason not to order a child's return.

One of Interpol's most important functions is to help police in member countries share critical crime-related information using the organization's system of international notices.

Notices can be issued in cases of international child kidnapping. 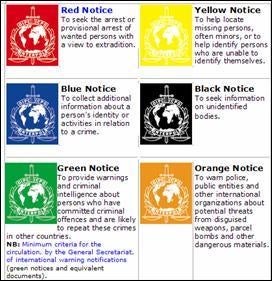 (1) each year, several hundred children are kidnapped by a parent in violation of law, court order, or legally binding agreement and brought to, or taken from, the United States;

(2) until the mid-1970's, parental abduction generally was not considered a criminal offense in the United States;

(3) since the mid-1970's, United States criminal law has evolved such that parental abduction is now a criminal offense in each of the 50 States and the District of Columbia;

(5) many of the extradition treaties to which the United States is a party specifically list the offenses that are extraditable and use the word ‘kidnapping', but it has been the practice of the United States not to consider the term to include parental abduction because these treaties were negotiated by the United States prior to the development in United States criminal law described in paragraphs (3) and (4);

(6) the more modern extradition treaties to which the United States is a party contain dual criminality provisions, which provide for extradition where both parties make the offense a felony, and therefore it is the practice of the United States to consider such treaties to include parental abduction if the other foreign state party also considers the act of parental abduction to be a criminal offense; and

(7) this circumstance has resulted in a disparity in United States extradition law which should be rectified to better protect the interests of children and their parents.

For purposes of any extradition treaty to which the United States is a party, Congress authorizes the interpretation of the terms ‘kidnaping' and ‘kidnapping' to include parental kidnapping.

The Possibility of Extradition

Extradition, the surrender of a fugitive or prisoner by one jurisdiction for criminal prosecution or service of a sentence in another jurisdiction, is rarely a viable approach in international child abduction cases. Extradition is utilized only for criminal justice purposes in cases that prosecutors believe can be successfully prosecuted due to the sufficiency of the evidence. Prosecutors may decide not to proceed with a request for extradition for a number of different reasons. Moreover, it must be remembered that extradition does not apply to the abducted or wrongfully retained child, but only to the abductor. There is no guarantee that the child will be returned by foreign authorities in connection with extradition of the alleged wrongdoer. Threatened with impending extradition, abducting parents may hide the child or children with a friend or relative in the foreign country.

Another reason that extradition may not be useful in a given case is that the offenses of parental child abduction or custodial interference are sometimes not included in the U.S. Government's extradition relationships with some foreign countries. The United States now has extradition treaties now in force at this point with over 120 foreign countries. Some of these are “dual criminality” treaties while others are “list” treaties. In each case, in order for conduct to be an extraditable offense under a particular treaty, the conduct in question must be (1) be extraditable under a given treaty, the conduct in question must be considered a crime in both countries, and (2) and also included as an extraditable offense under the treaty. In this respect, the United States Government has two kinds of extradition treaties, “dual criminality” and “list” treaties.

Dual Criminality Treaties: U.S. Government's Most modern extradition treaties (i.e., generally those concluded after 1980) usually include a “dual criminality” provision. This means that persons generally may be extradited under the treaty if their conduct is a crime punishable by more than one year imprisonment in both countries.

As a result, if the illegal conduct involved in a particular parental child abduction or custodial interference case is a crime punishable by more than one year imprisonment in both the United States and the foreign jurisdiction country concerned, then that conduct would be considered an extraditable offense under most extradition treaties that are based on “dual criminality” extradition treaties. (A small number of the U.S. Government's dual criminality treaties use periods other than one year as the measure for extraditable offenses.)

If the conduct is not criminalized a crime in either the United States or the foreign country, then it will not be an extraditable offense.even if our treaty with that country is a modern “dual criminality” treaty.

Despite the fact that parental child abduction may be covered by certain extradition treaties, you should be aware of potential difficulties in utilizing them. Apart from the possible counterproductive effects already discussed, specifically, most all civil law countries (in contrast with common law countries like the United States, United Kingdom, Canada, and Australia) refuse to extradite their own nationals. Nearly all the nations of Latin America and Europe are civil law countries. Whatever the terms of any applicable extradition treaty, experience has also shown that foreign governments are generally reluctant (and often simply unwilling) to extradite anyone (their own citizens, United States citizens, or third country nationals) for parental child abduction.

For extradition to be possible, therefore:

· The local and/or federal prosecutor must decide to file charges and pursue the case, and you should be prepared to testify in any criminal trial;

· There must be an extradition treaty in force between the United States and the country in question;

· The treaty must cover parental child abduction or custodial interference;

· If the person sought is a national of the country in question, that country must be willing to extradite its own nationals; and,

· The country in question must be willing to extradite persons for parental child abduction /custodial interference (i.e., not refuse to do so for "humanitarian" or other policy reasons).

The International Parental Kidnapping Act (18 USCA 1204), enacted in 1993, is an important component of the international family lawyer's arsenal.

The statutory language is as follows:

(b) As used in this section—

(1) the term “child” means a person who has not attained the age of 16 years; and

(2) the term “parental rights”, with respect to a child, means the right to physical custody of the child—

(A) whether joint or sole (and includes visiting rights); and

(B) whether arising by operation of law, court order, or legally binding agreement of the parties.

(c) It shall be an affirmative defense under this section that—

(2) the defendant was fleeing an incidence or pattern of domestic violence; or

(d) This section does not detract from The Hague Convention on the Civil Aspects of International Parental Child Abduction, done at The Hague on October 25, 1980.